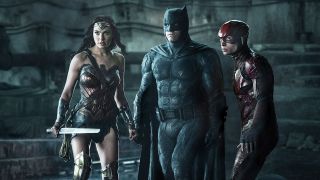 Darkseid, the Big Bad of the DC Universe and equal perhaps only to Thanos when it comes to causing universe-shaking dread, is finally coming to the DCEU. The ruler of Apokolips was originally meant to be a part of Justice League but only appeared in the fabled, unreleased Snyder Cut. Now, though, Darkseid is confirmed to appear in a future DC movie: Ava DuVernay’s New Gods – and he’s not coming alone.

New Gods, which revolves around the nefarious goings-on of Darkseid and other powerful beings from Apokolips, is set to arrive at an as-yet-unconfirmed date and will be directed by Ava DuVernay (who recently helmed the Netflix series When They See Us) and co-written by DuVernay and long-time Batman writer, Tom King.

It’s clear that those behind the scenes carry some serious authority, and it’s looking like those in front of the camera will, too. During a recent #AskAva session on Twitter, DuVernay confirmed that Darkseid will be in the movie, as will the Furies, a group of warriors from Apokolips.

How could any self-respecting Barda fan not include the The Furies?! I’m looking forward to them so much. #AskAva https://t.co/83zD6PeFBxJuly 30, 2019

Many, though, will still hold out hope for a Justice League Snyder Cut release to give us the first canonical appearance of Darkseid.

As revealed earlier this year by Kevin Smith, a purported Justice League trilogy involved Darkseid appearing in the wake of Steppenwolf’s defeat at the end of the first movie to help set up a showdown in the Justice League sequel. This, of course, never happened and Darkseid has been left in limbo ever since.

With DC’s movie slate, including Wonder Woman 1984, the Joker movie, James Gunn’s Suicide Squad, and Birds of Prey taking us right up until 2021, don’t expect a Darkseid DCEU debut anytime soon. But it’s nice to know we’ll all be outrunning the Anti-Life Equation sooner rather than later.

Take a sneak peek at the week ahead in entertainment with Release Radar, our look at the next seven days in games, movies, and TV.