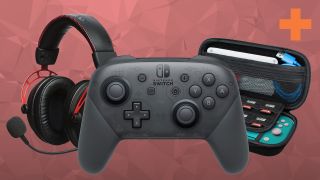 If you were lucky enough to get one of the best Nintendo Switch bundles over the holiday season, it's worth picking up some choice Nintendo Switch accessories to go along with it. Yes, I know, it's frustrating to shell out yet more cash when the console itself is pretty expensive. But like so many Nintendo machines in the past, the Switch is a rare example of a system that actually benefits from peripherals - be it a case for when you're out and about, a portable charger, or a bonus controller to use in multiplayer Mario Kart 8 Deluxe tournaments on the big screen.

Cheap Nintendo game deals
Get your hands on more savings, price-cuts and bargains via our guide.

Nintendo Switch SD cards (also known as 'memory cards') are the perfect example. Regardless of whether you get the standard console or the handheld-only Switch Lite, you'll only receive a meagre 32GB of internal storage to play with. That may sound like a fair amount at first, but it's actually very little when you consider how much room certain game downloads and updates can take - particularly if you're grabbing online-only games such as Fortnite. Thanks to their low cost, they're some of the most essential and justifiable Nintendo Switch accessories out there.

Not that you'll need to fumble your way through online retailers alone in search of a deal. Our team of experts are here to point you in the right direction, and we've worked hard to bring you the lowest prices as well. This page is regularly updated with the biggest bargains and cheapest offers too, so be sure to come back every now and then if you want the maximum discount.

The best case for Nintendo Switch

The Orzly takes the kitchen-sink approach to storage; it’ll fit the console, multiple Joy-Cons, games, cables, and SD cards inside without any fuss. It’s not too hefty or expensive either, and it can also fit a Switch with its Mumba shell attached. It's easily the best case for Nintendo Switch.

The Switch Lite blurs the line between handheld and home consoles, but its portability means you'll need the best case for Nintendo Switch Lite to keep it all undamaged. Luckily, Orzly have a model specifically designed to fit your Lite. Although you won't get Joy-Cons in there, it will keep your new console and a few accessories safe on the go.

Features: Hard shell, can be used while playing

This is the ideal way to keep your console safe from knocks. Grippy and sturdy in equal measure, it’ll make you feel more secure when taking your Switch out with you. Happily, it also fits into the Orzly carry case we mentioned above.

The best controller for multiplayer

The humble Joy-Cons are Switch's answer to the Wii Remote. Two come in
every box of the original console, and they're perfect for almost much anything it can throw at you - especially multiplayer sessions. That's because players can use them as a pair or individually.

The best controller for singleplayer games

Sometimes Joy-Cons aren’t enough; sometimes you want something a bit more traditional. Enter the Pro Controller. This classically-styled handset has a layout that draws on everything from the Gamecube to Xbox One, and it’s a must for games like Super Smash Bros. Ultimate or Splatoon 2. While you can get them cheaper from other manufacturers, you’re better off with the official Nintendo model in our experience. Not only is the build-quality excellent, it boasts Amiibo functionality that third-party alternatives lack.

If you’re feeling the itch for a hit of nostalgia, we’d recommend looking at the 8bitdo controllers. You can get one shaped like the SNES handset with added analogue sticks and a share button to make it fully compatible with the modern Switch.

AU
$23.99
View at Amazon
AU
$32
View at PCcasegear
AU
$59.95
View at Amazon
See all prices (4 found)
Relatively cheap
Plenty of storage space
Will last you a while
Easily lost

Regardless of the version you have (be it a classic Switch or the new Switch Lite), a drawback to the Nintendo Switch console is its limited storage space. You’ll only get 32GB of internal memory out of the box, and this won’t carry you far. It'll do just fine to begin with, sure, but games, updates, and DLC take up a lot of memory these days. That’s why SD cards are a must. They'll boost your system’s storage by a long way, and they aren’t too pricey either.

To get specific, we’d recommend the SanDisk Ultra 128GB card. This is enough for five to ten big games or a load of smaller titles, so it’ll definitely keep you going for a while.

The best Nintendo Switch headset in 2019

If you want the right balance between price and performance for your Switch, look no further than the HyperX Cloud Alpha. It's comfy, durable, and has a superb frequency response range, meaning the sound is richer than most other headsets and it's less bassy and noisy. You can pick this one up for less than $80 / £70, and it's a great pair of cans - easily the best Nintendo Switch headset out there.

We’d say the best portable charger for Switch would be the Anker PowerCore 26800mAH. As an official Anker product, you know you’re getting good-quality tech right away. It’ll give you extra hours of play when you're on the move, and it can charge other devices (like your phone) as well.