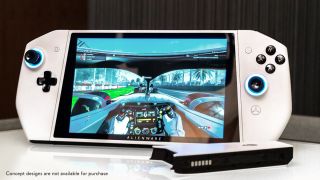 Alienware debuted a new concept for a hybrid portable PC that features detachable controllers on the sides and the ability to connect to TVs and monitors. Sound familiar? Of course it does, because Nintendo came out with something awfully similar almost three years ago, the Nintendo Switch.

The Concept UFO is Alienware's new portable PC, and aside from its signature Alienware aesthetic, it's basically a Nintendo Switch that runs on Windows 10. I'm actually not against the idea of a Switch-like handheld with a bigger selection of games and presumably beefier internals. That said, there are a lot of unknowns, including whether the Concept UFO will ever land on Earth at all.

The Verge was able to spend some time with the prototype and found it "surprisingly functional." Like the Switch, the UFO's controllers can be connected to a grip that provides the feel of a traditional gamepad. Likewise, the Concept UFO can be propped up using a kickstand. Unlike the Switch though, Alienware's portable rocks an 8-inch 1200p display and weighs three times as much as the Switch.

At this early stage, Alienware is understandably mum about what's powering their new handheld. Though, from what little we know, it should be a good deal more powerful than the Switch, and accordingly more expensive.

If you're waiting on a more powerful hybrid console, it's just as worthwhile to turn your attention to recent rumors suggesting a new-and-improved Switch could be coming as early as this summer. Of course, just like the Concept UFO, there's nothing official confirming anything will surface beyond speculation.

For now, slow down and enjoy the best Switch games to enjoy on the couch or on the go.