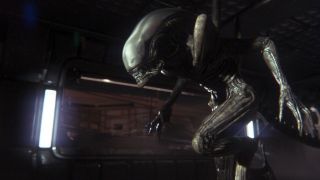 Alien: Isolation is finally coming to Nintendo Switch more than five years after it was initially released on PC and consoles. The Creative Assembly game is properly terrifying and was well-reviewed upon its release. GamesRadar+ gave it a 4.5/5 and it's considered a fantastic addition to the horror genre, incorporating stealth elements and the occasional jump scare to give your heart a workout. Now, you can scare yourself in any setting, as it's going portable on December 5. Check out the trailer below.

The game incorporates stealth horror elements in an incredibly cool retro-futuristic setting that feels like it's pulled from the original Alien movie - PC Gamer reported back in 2015 that Fox gave Creative Assembly over three terabytes of original production material. You'll step into the space boots of Amanda Ripley, Ellen Ripley's daughter, who heads to a remote space station to retrieve the flight recorder of her mother's doomed ship. Naturally, there's an alien on board, and you'll have to outsmart it in order to survive - Alien: Isolation isn't about pulling the trigger, but focuses on your ability to stay alive despite the slow, ceaseless burn of anxiety brought on by your surroundings. Like Christmas dinner with the family, but aliens.

Alien: Isolation will release for the Switch on December 5 with gyroscopic aiming, HD rumble, and all seven of the originally released DLCs included. I've got a great mental image of someone playing it on my morning commute and screaming viscerally the first time they glimpse the alien in question - although on the NYC subway, I'm sure no one would even bat an eyelash.

These Nintendo Switch Black Friday deals are far from scary.