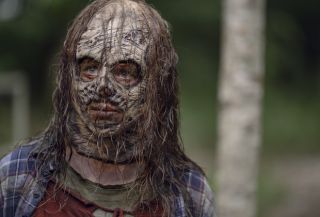 Just one week after The Walking Dead season 10's phenomenal San Diego Comic Con 2019 panel, in which a trailer and a release date were unveiled, the show's network AMC has released two photos of new cast member Thora Birch.

The American Beauty actress will play Gamma, a member of the villainous Whisperers and someone who has a frightening amount of faith in their leader, Alpha. She will no doubt make a good foil to Alpha's actual daughter, Lydia, who last season was taken under Daryl's wing.

The new photos feature Birch's Gamma with and without her zombie-mask on. See both below.

The Walking Dead season 10 debuts on October 6, 2019. Also joining the cast is Kevin Carroll, best known for his role on the hugely overlooked HBO series The Leftovers. He will play Virgil, a survivor who is anxious to reunite with his family. Classic.

Also announced at Comic Con, Michonne actress Danai Gurira will be leaving the show this coming season. "I would just like to say that this has been one of the purest joys of my life to play this role and to be amongst these people and those who are not here right now and amongst all of you," she continued, according to The Hollywood Reporter. "I'm very thankful for the experience I've had in ways I can't state right now. My heart does not leave in any way, shape or form. The TWD family is forever. The connection between us never ends."