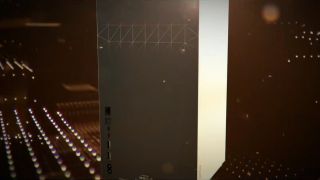 Update: In a statement to GamesRadar+, AMD has clarified that their display at CES revealing the Xbox Series X's backside and ports "does not accurately represent the design or features of the upcoming console."

We previously reported that the ports were identical to the Xbox One X, which includes two HDMI ports, two USB-C ports, an S/PDIF port, and an Ethernet port. AMD didn't provide clarification as to which ports the Xbox Series X will actually feature, but we'll relay any info we learn on that front as it comes.

AMD revealed a new side (quite literally) to the Xbox Series X at CES, giving us a look at the next-gen Xbox's ports. These details can help point to different features we can expect, so let's break down what's going on back there.

First off, the Xbox Series X looks like it uses the same power supply as the Xbox One - here's hoping it doesn't come sporting the same gargantuan power brick. Elsewhere, we can see the console two USB-C ports, two HDMI ports, an Ethernet port, and an S/PDIF port.

Like the Xbox One, Xbox One S, and Xbox One X, the Series X features two HDMI ports for pass-through support. This allows you to connect your cable box directly into the console while reserving another port for connecting console to TV. The rest of the ports are identical to the Xbox Series X, which unfortunately means we can't glean anything new from them about the upcoming console.

As if there was any question, the Xbox Series X has no bad angles. The backside is just as elegant and handsome as the frontside, and the port layout is clean and sensible. Nothing revolutionary, but it's good to know the new Xbox isn't hiding an unsightly appendage back there.

In related news, Xbox boss Phil Spencer has revealed an image of the Xbox Series X's 8K CPU as his official Twitter profile picture. This is in line with Microsoft's claim that the Series X's resolution output quadruples the number of pixels in the Xbox One X.

Here's every upcoming Xbox Series X game we know to be rumored or confirmed for 2020 and beyond.