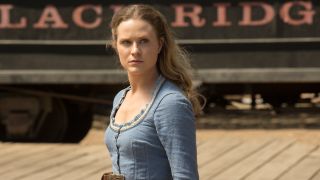 We still have a while to wait until Westworld season 2 debuts on HBO in 2018, but when it does, we’re going to see a more “evolved” version of one of its main characters. Evan Rachel Wood, who plays Dolores, told Entertainment Weekly that her inquisitive cowgirl will be “unleashed” in the show’s upcoming second season.

Warning: spoilers ahead. If you haven’t caught up, turn back now.

“I’m really curious to see the unleashed version of her that we caught a glimpse of at the very end of the finale,” Wood said. “Those final seconds, I think we were seeing a completely different side to her, completely different programming and completely off of her leash, so I don’t think she will be the same person; she’ll be an evolved version.”

Dolores has definitely seen some shit in her time in the elaborate theme park. She’s the oldest active host in Westworld, and her narrative was eventually merged with a villain called Wyatt’s, resulting in her shooting the park’s creator, Dr. Ford (Anthony Hopkins), in the back of the head. After spending the entirety of the first season searching for her identity, we finally saw her become self-aware in the last moments of the finale, and the fact that she fired into a crowd of humans is a pretty clear indication that she’s ready to lead a revolution against her creators. Sounds like it’ll make for some bloody good television.

Check out a list of Westworld easter eggs, and find out who may be Dolores’s right-hand woman for the battle to come.