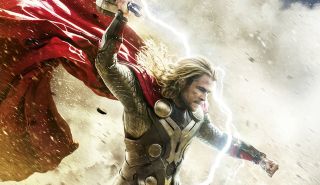 Thor: Ragnarok is currently a few weeks into filming in Australia, and while we've gotten a number of fun updates from the set courtesy of director Taika Waititi and stars Chris Hemsworth and Mark Ruffalo, we still don't know all that much about the threequel. Some new photos from the set are showing up all over social media - including this hilarious pic on Hemsworth's Facebook account - but there's one image in particular posted by writer-director Daley Pearsonthat's worth talking about.

At first glance that may just seem like a simple image of Hemsworth's hero holding a business card with a handwritten address on it. As HitFix first spotted though, the address in question could be very significant:

That's a pretty big indicator that Thor will be paying Doctor Strange a visit next year and that new info begets a ton of questions, chief of which is why is Hemsworth's hero searching for the Sorcerer Supreme in the first place? My bet is it probably has something to do with the infinity stone that is likely housed in Strange's Eye of Agamotto; The last time we saw Thor he was on a mission to figure out what's coming, and with Avengers: Infinity War fast approaching Marvel need to start getting all their ducks in a row.

In any case, having Strange pop up here is also a smart move when it comes to enhancing the connectivity of the Marvel Cinematic Universe too, so while there's plenty of room to speculate here I wouldn't be surprised if Cumberbatch does indeed make a cameo when Thor returns to cinemas next year.