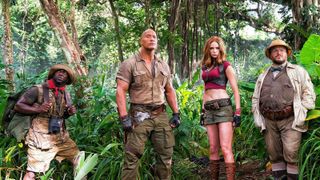 If you looked at Dwayne Johnson and Karen Gillan all dressed up for their roles in Jumanji and thought, "dang, they look like a couple of video game characters", congratulations! You were totally right. A presentation at CinemaCon (via Deadline) revealed that the film, fully titled Jumanji: Welcome to the Jungle, trades in the old "magic board game" premise for a body-swapping video game.

“The walls between our reality and entertainment are becoming virtually transparent or invisible. The whole idea behind this movie is that you literally inhabit a game,” Tolmach said. “We all think of games as something you play, and then it’s time for dinner, or you need to go to work or do your homework, and you walk away from the game. But if you’re actually in a game, those rules are very different and the stakes of that game become very real.”

Ahhh, so maybe the kids will get stuck in the game this time, rather than the game spilling out into their world? That would let the film explore the kind of stuff Robin Williams' character must have gone through as he spent decades trapped inside the board game in the original film. Getting stuck inside a video game is hardly a new framing device, but with rhinos instead of light cycles I'll give it the benefit of the doubt for now.

Speaking of Robin Williams, director Jake Kasdan explained more about how the new movie will serve as a continuation rather than a reboot of the original Jumanji.

“Jumanji is the kind of movie that I think people shouldn’t out-and-out remake," Kasdan said. "To me, a big part of its power is in the unique elements of its original execution. Within that, I think there’s this central idea and mythology that’s mysterious, but powerful, and commands a powerful part of the imagination [...] I was a fan of the original movie, and I felt like this [Jumanji update] really honored it, and included a lot of the stuff that I loved about the original movie, but did it in a really new way".