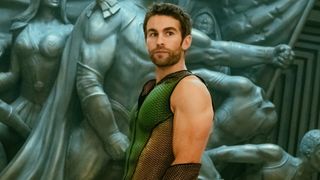 The first-ever deleted scene from The Boys season 1 has been released. In a brief two-minute clip from the Amazon Prime superhero series, The Deep (Chace Crawford) is seen teaching CPR to a handful of lifeguards and, yes, he still somehow manages to douche up the place with his unfathomable obnoxiousness.

It’s unclear where The Boys deleted scene would have fit in, though it’s presumably before The Deep was cast out of the Seven and sent to the depths of Ohio. In it, the fish-themed ‘hero’ is giving a lesson in how to save someone’s life. It gets gross. Very gross.

Just because you're saving lives doesn't mean you can't get swole. #TheBoysTV pic.twitter.com/7H3STN8EaFJanuary 27, 2020

With references to pumping, spitting, and more than one mention of the groin area, The Deep’s slimy charm unfortunately oozes all over the deleted scene. He even takes one woman to task for using her phone, but not before he attempts to showcase his strength to her by using only one hand to compress the dummy’s chest. Check out the tough guy over here. Inevitably, numerous sex and penis jokes follow.

While this is the first deleted scene from The Boys that’s surfaced, it’s not the first we’ve heard about. Show creator Eric Kripke revealed that one moment actually had to be cut from season 1. The full details are here but, if you’re apprehensive, here’s a two-word preview: Homelander spunk.

The Boys season 2, meanwhile, has a trailer you can watch to tide you over until its release – revealed to be “mid-2020” according to a Karl Urban Instagram post late last year.

From The Man in the High Castle, to The Expanse, and beyond, here are the best shows on Amazon Prime.