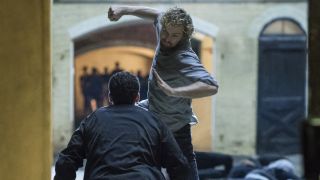 Netflix have announced a March 17, 2017 release date for their new Marvel TV show Iron Fist, and to celebrate we have a UK exclusive first look at the new hero in action. Scroll down to see the martial arts maverick - played by Game of Thrones’ Finn Jones - in all his ass-kicking glory in the full exclusive image.

Did you see all those bodies behind him? Pretty impressive, right?

Marvel's Iron Fist sees billionaire Danny Rand returning to New York after being missing for years, trying to reconnect with his past and his family legacy. He fights against the criminal element corrupting New York City with his kung-fu mastery and ability to summon the awesome power of the fiery Iron Fist.

With Marvel's Luke Cage hitting Netflix last week, it makes sense the streaming company is turning its attention to the newest member of The Defenders. Once Iron Fist gets his debut season, the line-up will be complete for the crossover show Netflix has been teasing for years.

If you've already binge-watched all of Luke Cage, it's good to know when you'll be getting your next dose of Netflix-Marvel action... even if it is in a year's time. And if you need another reminder of that date, check out the cool release date video Netflix has made for the occasion. Very mysterious.