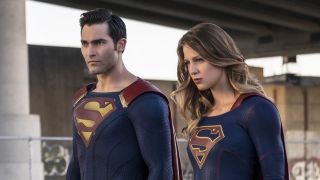 Supergirl's second season is just a couple weeks away from its debut on The CW, and while it will be fun to see Melissa Benoist's heroine in action once again it's the introduction of Tyler Hoechlin's Superman that fans are most excited for.

Entertainment Weekly have debuted the first clip from the premiere - which is titled 'The Adventures of Supergirl' - and it sees Hoechlin doing a pretty great version of Clark Kent before morphing into the Man of Steel to lend his cousin a helping hand.

The CW have also unveiled a 60 second trailer for the episode that gives us a humorous hint at the impact Superman has on Kara's friends...

#SupergirlCW and Superman team up on the season premiere, Monday, October 10 at 8/7c on The CW! pic.twitter.com/ZjwYsEB8RhSeptember 26, 2016

Both of these clips left me with a big smile on my face; Hoechlin looks to have nailed both the dorkiness of Clark Kent and the confidence and heroism of Superman, and it looks like the show will get much closer to the essence of the character than the recent movies have done.

The only thing I wasn't too fond of in this footage is the cheesy dialogue - "We can only hope that wherever he is, he's seeing this" felt like a very unnecessary line - but there's definitely more pros than cons in these teasers. Here's hoping we can say similar things about the full episode next month.