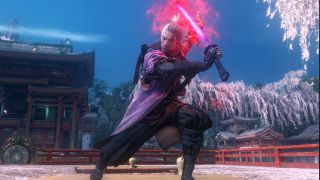 At its core, Sekiro: Shadows Die Twice is essentially a boss rush game. It's easy to navigate the map, avoid regular enemies, and go straight from boss to boss. But you can never have too much freedom and this boss rush mod opens the game up a bit.

Created by modder Thefifthmatt, the Sekiro Boss Rush mod lets you warp from boss to boss, instantly, in any order. It cuts some of the game's fat, letting you get to the meat of the entire experience. It's also good for designing curated runs that feature bosses in a certain order. You can check out the mod in action right here:

"Similar to my other major gameplay mod Bloodborne Combat, I would not recommend it for first playthroughs, but rather to reexperience the game's content with new gameplay elements and new challenges," Thefifth matt wrote on the mod page. "Fromsoft games are never unreasonably difficult - they are tough but fair - and I aim for the same thing with my mods. Though apparently if literally anything is changed from the base game it's now "easy mode lul", which is not how game balance works, but ok. As always, hit me up if you've actually played the mod and have thoughts on balancing or features to add."

Here's a breakdown of the other changes the mod brings to the game: