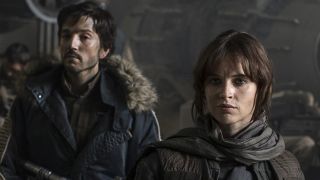 Despite a teaser trailer and a lot of concept art, there's still a fair bit of mystery surrounding Star Wars: Rogue One. Disney and Lucasfilm are looking to lift the veil on the highly anticipated spin-off in a big way this week, and now thanks to Entertainment Weekly we have more details on our new heroes (and villain), plus new official images you can check out in the gallery below...

This is obviously not an official photo of Mads Mikkelsen's Galen Erso as Disney haven't released one yet, but we thought we'd include it as it's part of EW's exclusive set of images.

While the vast majority of Rogue One characters we'll meet in December are new to the Star Wars universe, fans will know that Forest Whitaker's Saw Gerara first appeared in season 5 of The Clone Wars. While the character has a lot of history that's well worth catching up on, those who are unfamiliar with the character will likely be just fine while watching Rogue One.

As for the other heroes, Jyn Erso - who is described as a "streetwise delinquent" with a "chequered past" - continues to sound like a winning protagonist, and I'm excited to see Felicity Jones bring her to life. Plus, the details also confirm that Firefly's Alan Tudyk will indeed be playing the droid we spotted in the trailer, who we now know is called K-2SO and "the antithesis of C-3PO".

We've updated our Rogue One cast guide with ALL the new details from EW so check it out for everything there is to know about the new Star Wars squad.