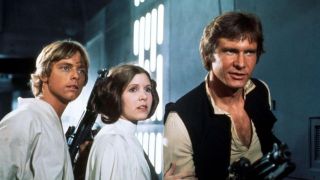 Earlier this week we learned that Star Wars: Rogue One is headed back to a galaxy far, far away for some reshoots. This spawned the usual round of speculation as to what the additional shooting could mean, and as it turns out it's got nothing to do with more Darth Vader, a Han Solo cameo, or the return of Jar Jar Binks.

According to The Hollywood Reporter, "the goal of the reshoots will be to lighten the mood" as right now Rogue One has the "feel of a war movie". At first glance this reads as a little strange - the darker, grittier side of the Star Wars universe is one of the appeals of Rogue One - but it's for a good reason. THR's source revealed that "this takes place just before A New Hope and leads up to the 10 minutes before that classic film begins. You have to match the tone!”

Rogue One's proximity to A New Hope makes it perfectly understandable why Disney execs feel they need a little more levity in the Star Wars spin-off. It's also worth noting that none of these reports have said that Gareth Edwards' film is bad, only that it takes some risks that the higher-ups aren't quite comfortable with. There's a legitimate argument to be made that The Force Awakens was too risk-averse, so here's hoping the final cut of Rogue One has a few surprises when it finally makes its cinematic debut.