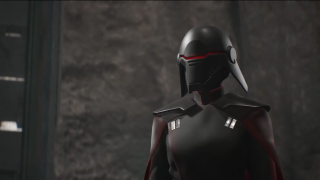 As mentioned above, you don't need to kill the Second Sister in this fight. Get her down to approximately halfway and a cutscene will commence, interrupting the fight and getting you to safety. So the first piece of advice is to not worry about conserving stim canisters to get all the way through her gargantuan health bar, because it's only really half the size.

The key thing to watch out for in the Second Sister boss fight is her unblockable attacks, indicated by when she glows red. These often come at the end of a long string of normal attacks, or right after you've attacked her. The optimal time to get in a heavy attack is when she performs her ground slam, as her lightsaber will get stuck in the ground for a moment, opening a window of opportunity. Just make sure you dodge out of the way when she leaps into the air.

Her other unblockable attack is similar, but she executes it quicker and you don't want to try and squeeze in a retaliation right after it because she'll often follow it up with another quick attack. Instead, use this time to step back and heal up if you need it.

When it comes to her regular attacks, most of them are fairly easy to parry if you get your timings right and doing so will interrupt her combo. Remember, if you need time to heal or you need to get a heavy attack in, Force Slow works so you can buy yourself a few moments.

Eventually, you'll reach a stage of the fight where the Second Sister will taunt you around the side of the arena. Don't fall for her intimidation tactics because she'll zap out of your way as you go to attack her; instead, wait for her incoming unblockable lunge attack after she draws a line in the ground with her lightsaber. This attack has ridiculous range, so you need to time your dodge perfectly.

Finally, make sure you're using the single bladed lightsaber for this fight (and most other bosses)! The double lightsaber might have increased range and faster attacks, but the single lightsaber deals more damage per attack and you won't be able to get more than one or two hits off in a row in this fight anyway. When you've whittled the Second Sister down to half health, the cutscene will begin and you've "beaten" her. Don't worry, it's not the last you'll be seeing of her...