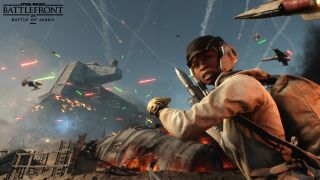 EA and DICE are celebrating Star Wars Day (that's May the 4th, obviously) by handing out some special bonuses to Star Wars Battlefront players. Or you can log on today and try out the game's latest patch, which went live today with a bunch of tweaks to the new combat roll mechanic.

You'll be awarded 4,444 credits simply for logging into the game on May 4. Handily enough, Jabba the Hutt will also offer a new contract that requires players to spend 3,500 to 8,000 credits (not sure what happens if you spend 8,001) and complete bounties to unlock a new Star Card: the Bacta Bomb, which heals yourself and your allies within a certain area. If you want to give the game a shot on PC, Origin will offer four hours of free playtime with the base version starting at 11 a.m. PDT / 7 pm BST.

As for today's free update, DICE has gone to work on the new combat roll mechanic it patched into the game back in March. There's now a 1.5 second cooldown to keep you from rolling across the map like you're back in Ocarina of Time, and you should be able to see other players rolling instead of just weirdly sliding around. You'll now also see a special icon above enemies' health bars to indicate if they have a charge card active.

Other changes include more damaging chokes for Darth Vader, less damage and longer cooldowns for Nien Nunb, and more health and longer blocking for Luke Skywalker. You'll still have to wait until June to play as Lando, though.