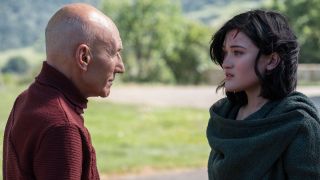 At the beginning of Star Trek: Picard, the legendary Jean-Luc is living a quiet life on the family vineyard, seemingly more interested in grape harvests than exploring strange new worlds. Then Dahj, a young woman on the run from an unknown threat, arrives on his doorstep – and the former Enterprise captain can’t ignore the fact she needs his help.

For newcomer Isa Briones, working with Patrick Stewart was as big a deal as coming face-to-face with Picard is for Dahj. “It’s nerve-wracking with acting with such a legend!” Briones admits in an interview with GamesRadar+. “I’ve never really done anything of this scale, so it was really just learning as you go and hope you don’t eff it up!

"When I got [on set] I was trying to act calm, trying to remember my lines, trying to wear a really heavy, hot cloak. But then we got to a certain point, and as you can see in the trailer, that scene in the vineyard is very emotional, and I was shaking and crying. They had to hold because an airplane was going over, and I was like, ‘Are you kidding?’ But as I was trying to stay in [the scene], Patrick just kept holding my hands and kept looking in my eyes for probably 30 seconds – it just felt like, ‘I’ve got you, I’m here for you.’ That’s honestly how it’s been all the way through working with Patrick.”

Although Dahj comes looking for Picard’s assistance, in some ways she’s rather adept at looking after herself – indeed, she possesses the sort of in-built, superhuman abilities that tend to leave would-be attackers strewn across the floor. For Briones, getting to play the best fighter in the room was a fun part of the Star Trek: Picard adventure.

“It was so cool, living out my action star dreams,” she laughs. “I used to do martial arts when I was a kid but I stopped when I was pretty young. In musical theatre you’re also supposed to be able to dance and everything, so I’ve always tried to take dance lessons, but I’ve realised that martial arts comes to me so much more easily than dancing ever has.

“Also, we had an amazing stunt team. They were so respectful of how much I could do – of course, you want to do all your stunts, I want to be like Tom Cruise and do everything, but you also have to know your body because you want a long career. My incredible stunt double kind of took care of the flipping and the running up the stairs, but it was such a cool experience, something that I never thought that I would do. It’s amazing to play a character that gets to do everything – to have the action moment, have the really emotional moment, have the really fun, sweet, falling in love moment… You get to play all of those and it’s not every day you get a role that does all of that.”

Are you a newcomer to the Star Trek franchise? Then it's perhaps worth watching these 10 key Star Trek: The Next Generation episodes before Picard begins.