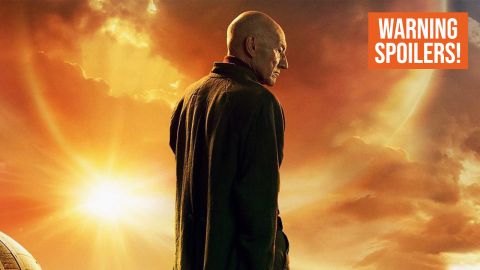 Star Trek: Picard is a satisfying evolution of the Next Generation story that goes where no Trek has gone before

With the possible exception of the Rolling Stones, pop culture phenomena don’t last for more than half a century without a capacity for frequent reinvention. Star Trek’s been through more makeovers than most over its long history: The Next Generation was radically different to the more gung-ho Kirk era, while JJ Abrams’ 2009 reboot added an injection of Star Wars-like blockbuster fun to the mix. When Star Trek: Discovery arrived in 2017 it felt like a shift to a darker, less idealistic vision of the future – as much Battlestar Galactica as boldly go.

Star Trek: Picard, the eighth Trek television series, marks another major shift, even from Discovery. It’s still unmistakably part of the same canon, yet this is purposefully slow and thoughtful television, more driven by dialogue than spaceships. Indeed, aside from a brief coda on a Borg Cube under Romulan management, the whole episode is Earth-based. That’s not to say Picard’s feels small – the beautifully cinematic widescreen vistas and cityscapes are light-years from the beige Enterprise sets of The Next Generation – but that the focus is tighter, locked on the former starship captain who gives the series its name.

This isn’t the first time Star Trek has revisited an iconic Enterprise veteran years down the line, but Kirk’s struggles with turning 50 in The Wrath Of Khan are very different from the retirement years of the nonagenarian Picard. Living on the family vineyard with just the Romulan couple who care for him, and his dog (Number One) for company, Jean-Luc is a shadow of his former self. As with Luke Skywalker in Star Wars: The Last Jedi, there’s something heartbreaking about seeing an iconic character so scarred by events beyond his control, his best days so clearly behind him. “The dreams are lovely,” Picard responds when asked if he’s having nightmares. “It’s the waking up that I’m beginning to resent.”

Two decades have passed since the Enterprise’s resident android Data sacrificed himself to save Picard in Star Trek: Nemesis, but this season premiere does an impressive job filling in the gaps. Rather than resorting to infodumpy flashbacks, the episode uses a TV interview to discuss the destruction of Romulus (an event we knew about from JJ Abrams’ Star Trek), an android uprising that left Mars in flames, and Picard’s subsequent resignation from Starfleet. It’s an ingenious piece of writing that not only explains the ‘history’ but also exposes Picard’s emotional wounds – his regrets over the failure to save the Romulan people, and his anger that Starfleet is no longer the force for good it once was.

In fact, the shades-of-grey world of Star Trek: Picard provides an intriguing contrast with the comparative utopia of The Next Generation era – TNG writers frequently complained about the challenges of writing for characters in the conflict-free environment of the Enterprise-D – and gives Sir Patrick Stewart some wonderfully meaty material to work with. This is an actor who could make even the worst excesses of Trek technobabble sound Shakespearean, so armed with such emotionally charged scenes he’s in his element. It’s easy to see why the producers lobbied so hard to persuade Stewart to resurrect his most famous role.

For their part, the writing team have found the perfect reason for Picard to get back to saving the galaxy. At first glance, Dahj (Isa Briones) appears to be the latest in sci-fi’s very long line of young people who discover they possess latent superhuman abilities. But when a vision in her head prompts her to take a trip to Picard’s vineyard and he starts to realise she’s somehow connected to Data, you’re instantly drawn in – and then utterly confused when, in the episode’s big ‘what the hell?’ moment, a character who’d been the focus of the Picard trailers is killed by Romulan assassins as Jean-Luc looks on, helpless.

While it looks like the end for Dahj, however – she’s going to struggle to come back from being vaporised, even in a sci-fi show – it’s the moment that feels like the beginning of Star Trek: Picard. As iconic as Jean-Luc Picard is, simply bringing him out of retirement for another adventure in a starship was never going to cut it. But by making Data absolutely pivotal to the plot, revealing that Dahj is not only the android’s super-advanced daughter but that she also has a twin sister introduces an intriguing Blade Runner-like element to Star Trek. Rather than simply being Picard’s last hurrah, the show is going where no Trek has gone before – a totally satisfying evolution of the Next Generation story.

And make no mistake, Picard is a show made with TNG fans in mind. Nods to the show are everywhere, from the numerous mentions of Earl Grey, to a model of Picard’s first command, the USS Stargazer. Meanwhile, Bruce Maddox, the AWOL scientist seemingly responsible for creating Dahj and her sister, appeared in classic season two episode “The Measure of a Man”, over 30 years ago.

Is it accessible to Trek newbies? Despite the writers’ best efforts to keep everyone up to speed, it does assume a lot of prior knowledge, so having Memory Alpha on hand could be helpful. That said, the show’s called Star Trek: Picard, so you can’t say they didn’t warn you.

Star Trek: Picard is a satisfying evolution of the Next Generation story that goes where no Trek has gone before