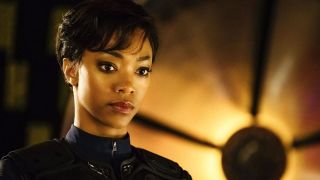 The voyages of Star Trek Discovery will continue for a second season. CBS announced in a post on the series' official site that the new show has been officially renewed, with nine more episodes to go in the first season (and we still have some questions after watching Star Trek Discovery episode 6). Trek fans have a lot to look forward to.

Not only is this good news for the show, it's also an affirmation for the CBS All Access streaming service that serves as Discovery's exclusive home in the US and Canada. I'll admit, I was worried that CBS had hamstrung the show's potential by locking Discovery behind a bespoke service, asking viewers for both a subscription fee and patience with downtime and other inevitable growing pains.

Speaking of which, if you're one of those lucky so-and-sos who gets to just watch Discovery on Netflix, you may have missed all the grumbling from this side of the Atlantic last night. It really stings to pay a monthly fee to watch one show in particular as soon as it's available and then not be able to actually watch that show.

Not very happy with #CBSAllAccess right now. Streaming is broken and can’t watch @startrekcbs. Reports all over about outage.October 23, 2017

Hopefully those issues were just a sign of the show's burgeoning popularity and CBS All Access gets whatever it needs to provide a smoother experience next week. We're still a good warp or two away from the season finale, though the show will go on a winter break after episode 9 airs on November 12. You can always check out our list of all the Star Trek Discovery Easter eggs while you wait.