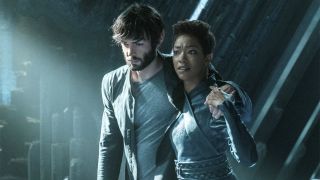 The Star Trek SDCC 2019 panel did not disappoint. Not only did we find out that Spock and Captain Pike will return in Short Treks (more on that later), but we now know exactly when Star Trek Discovery season 3 is set. On top of that, a new Discovery cast member was announced. Our sister publication, SFX, was there to log everything down.

David Ajala, who previously appeared in The Dark Knight and the Fast and Furious series, will be joining the cast in Star Trek Discovery season 3 as Cleveland "Book" Booker. The official description for his character reads: "Smart and capable, Book has a natural charisma and devil-may-care attitude that tends to get him into trouble as often as it gets him out."

David plays Cleveland Booker - known as Book. When they get to the other side of the wormhole, they'll have big problems, and might not even find each other... #StarTrek #SDCCJuly 20, 2019

Elsewhere, Alex Kurtzman, who is overseeing the current slate of Star Trek TV shows, confirmed that the events of the Star Trek Discovery season 2's finale means that season 3 will actually boldly go where no Star Trek show has gone before - 1000 years into the future.

Alex Kurtzman - almost a 1000 years into the future for Discovery season 3 #SDCC #StarTrekUniverse Always through Gene Roddenberry's filter of optimism. Not erasing canon but shaking things up. "It's still Star Trek and will always be Star Trek the way Roddenberry wanted it."July 20, 2019

Kurtzman also revealed that Short Treks, the 15-minute long mini-episodes that flesh out secondary characters and stories, will also be returning for a six-episode run. They're not your run-of-the-mill episodes, either. Ethan Peck is back as Spock in one, as is Anson Mount's Captain Pike. The final Short Trek will act as Picard TV show teaser, and two other Short Trek's will be animated.

The titles for the shorts are as follows: “Ask Not,” “Q&A,” “The Trouble with Edward,” “The Girl Who Made the Stars,” “Ephaim and Dot” and “Children of Mars.”

TRIBBLES! SPOCK! PIKE! ENTERPRISE! They're all back in new Short Treks! #StarTrekUniverse #SDCCJuly 20, 2019

NUMBER ONE IS BACK! Two Short Treks will be animated, not in the style of other animation. Last Short Trek will be a #Picard teaser, 15 years before the series #StarTrekUniverse #SDCCJuly 20, 2019