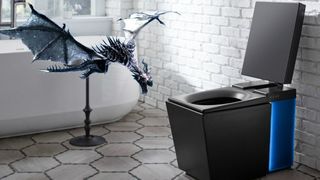 Remember when everyone used to make jokes about Skyrim's never-ending ubiquity, but then Bethesda ruined it by trying to join in and literally releasing Skyrim: Very Special Edition for Amazon's Alexa? Well, I have an update for you about that, and it's not one I'd ever thought I'd have to write about.

The Elder Scrolls 5: Skyrim, an RPG first released in 2011, is now playable on toilets. And I don't just mean playable from the comfort of your bog via Nintendo Switch, oh no. We live in a world where actual toilets are - at least in theory - able to run and operate Skyrim: Very Special Edition, letting you adventure in Tamriel by speaking directly to your own personal thunder mug.

Allow me to explain. Earlier this year, Kohler unveiled a new smart toilet, Numi, which offers compatibility with Amazon's AI Alexa to perform various functions on voice command, such as lifting the toilet seat or playing music from its own built-in speakers (seriously).

It's recently come to the attention of Reddit that, by default, this means Numi could technically download and play Skyrim: Very Special Edition, Bethesda's half-joking choose-your-own adventure style spin-off that's played entirely by speaking to your Alexa-operated device of choice.

The toilet costs over $6000, making this the most expensive way to play the worst version of Skyrim yet, even if the novelty of pooping and questing is nothing less than a priceless luxury.

Aside from all the wonderful puns that can be squeezed from this particular Skyrim port (see, there's one), the existence of the Numi also suggests that the game's conquest to appear on anything with a circuit board isn't over. Alexa could be ported to all sorts of devices in future, from fridges and cars, to ovens or office photocopiers, unintentionally bringing Skyrim: Very Special Edition along for the ride with it.

This is how the world ends, isn't it? Not with the rise of Skynet, but the slow, subtle creep of Skyrim to every man-made machine in existence. We should have seen it coming, really, but at least those aforementioned puns can tide us over until the inevitable, Bethesda-induced robot uprising. Flush-ro-dah!

If the concept of Elder Scrolls next to the toilet roll doesn't appeal to you, check out our thoughts on the best open world games you can play instead.