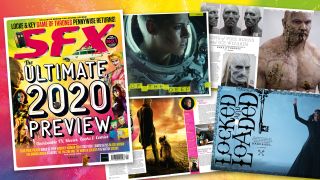 A 2020 preview is the cover feature of SFX magazine issue 322, which is now sitting in the shops, patiently waiting for you to take it home. Below we run down just a few highlights of the issue; alternatively, you can get a feel for the contents by skimming through this digital preview

Shake off the post-Christmas blues by finding out what treats are in store during 2020. Our massive 20-page preview lays out the films, TV series, books and comics coming our way in the year ahead. Come on people! We can do this!

Joe Hill's dark fantasy comic about a family who relocate to a creepy old house after their father's murder is coming to Netflix. We talk to showrunners Meredith Averill and Carlton Cuse.

The J-Horror franchise has been rebooted for a new American outing. We speak to writer/director Nicolas Pesce and find out why he's calling this instalment "the grown-up Grudge". Hopefully not because it involves discussion of the pros and cons of fixed-term and variable mortgage rates.

Kristen Stewart gets into deep water in this aquatic survival thriller/horror, menaced by something toothy miles below the surface. We quiz director William Eubank.  No relation to Chris. Probably.

Yes, yes, we know it finished ages ago, but we figured you might still be feeling withdrawal symptoms. So here's six pages of behind-the-scenes chat with one of the make-up effects wizards who made it all possible. You can stop shivering now.

Our regular retrospective slot Time Machine looks back at a classic every issue. This time it's the turn of this 1973 children's serial, in which people are suddenly, inexplicably driven to smash all types of machinery.

And that's not the end of the features! We also talk to Pennywise himself, Bill Skarsgård; The Witcher star Royce Pierreson; Artemis Fowl author Eoin Colfer; and two-headed writing team James SA Corey (the men behind the Expanse novels).

And the big features are just the tip of the iceberg! As ever, our news section, Red Alert, is crammed with insights into yet more movies, TV shows, comics and books. In the spotlight this month: Robert Eggers's new film The Lighthouse; vampire drama V-Wars, Ghost Stories goes on tour; and interviews with George Takei, Jodie Whittaker and Alice Krige.

The SFX verdict on The Rise of Skywalker kicks off 24 pages of searing critical analysis, as we inform you which of the latest films, TV shows, books, comics, audio plays, and video games are worth splashing your hard-earned cash on!

Buy this issue as a digital edition

Fancy having this issue on your iPad instead of as a print magazine? Here's how.

Apple users: click this link and you’ll be directed to SFX's page in the App Store. Once there, install the SFX app and hit Open to be taken to the SFX storefront.

We're also available on Android via the Google News App (just search for SFX Magazine once you're in) and Zinio too. Most digital formats give you a 30-day free trial, so you can try before you buy!

Having trouble finding a print copy?

If you live in the UK you can use this handy guide to find who's stocking SFX near you.

Live outside the UK, or nowhere near a newsagents? Don't despair! You can order SFX online and have it delivered to your door.

Alternatively, why not get the best of both worlds by subscribing? Take advantage of our cut-price digital and print bundles and take SFX wherever you go.