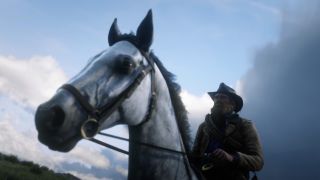 The recent release of Rockstar's massive open-world western on PC saw new additions for those who had waited to patiently play it on a computer, with the photo mode a key one. In today's update, whose patch notes you can read here, the photo mode has quietly been slipped in for PS4 players. Xbox One players will have to wait until January 21 to get photo mode, despite Title Update 1.15's notes reading "Photo Mode has been added for consoles." No word on why Photo Mode is only available on PS4 until January 21, but Xbox One players are unfortunately going to have to wait to test their amateur photography skills. No VSCO girls in Red Dead Redemption 2, for you Xbox players...yet.

It's not the only PC content that's heading to console. Here's what else you can expect with the latest update, including Red Dead Online's Moonshiner Frontier Pursuit:

Photo Mode has a bunch of features that lets you properly frame and touch up the photos you take when you're inspired by the breathtaking frontier scenes that surround you. And it wouldn't be a modern Photo Mode without the addition of filters, including Cyanotype, Bleach Bypass, Silver Gelatin, Woodburytype, and Daguerrotype. Let's see what kind of eye you've got, eh partner?

For more, check out our Red Dead Redemption 2 tips, which will help you with the gameplay, not the photography (sorry).