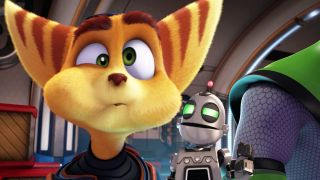 A new Ratchet & Clank game could be headed to PS5 around the time of the upcoming console's launch, if a new rumor is accurate.

Developer Insomniac Games, which was recently purchased by Sony after many years of close collaboration between the two companies, may return to the world of furry heroes and bizarre weaponry before releasing the next installment in the super-powered universe it started with Spider-Man PS4.

Video game podcaster Colin Moriarty recently shared the rumor, as reported by CBR: "We're going to get a Ratchet & Clank in-between [Spider-Man PS4 and its sequel] on PlayStation 5," Moriarty said. "I feel like that's going to be a launch game, the Ratchet & Clank game that's long been in development at Insomniac."

The Ratchet & Clank series started on PS2 in 2002, and its most recent entry was a 2016 remake of the original game (which also tied into an animated movie). Though it seemed like that latest game was set up to start a reboot series full of new adventures for the lombax/robot duo, we haven't heard much else about Ratchet & Clank since then. If the rumor's right, Insomniac will return to what is arguably its flagship franchise for its very first game on PS5 - and its very first game as an official Sony studio. There isn't much of anything to verify this rumor beyond Moriarty's comments, but at least it would feel right?

Sony itself hasn't officially announced any of the games set for the PS5 launch period, or any PS5 games period. However, a host of leaks and rumors point toward a PS5 February reveal event, so we could learn much more about the system and its initial lineup of titles within the next few weeks.

Get a preview of some more games that may be headed to Sony's next system with our guide to upcoming PS5 games.