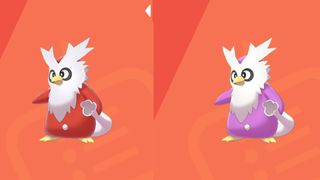 To begin shiny hunting, you first need to choose which Pokemon you want to hunt. Whether it's a Wooloo or a Wailord, pick your target then go to the location that particular pocket monster spawns the most (check out our Pokemon Sword and Shield Wild Area guide for all of the Wild Area spawns).

Essentially, you need to keep battling the Pokemon of your choice and either catch them or knock them out. The higher your tally of that specific species you've battled, the more likely it is to be shiny. You can check how many you've battled under the relevant Pokedex entry. While that's the basic gist of things, read on to understand how it all works and how to shiny hunt more effectively.

You already know the base chance of finding a shiny Pokemon in Pokemon Sword and Shield is 1 in 4096, but what about when you've battled lots more of that species? The table below outlines how many Pokemon you need to battle of one species to increase the chance of encountering a shiny.

You're probably wondering what on earth a Shiny Charm is after seeing the odds slashed so drastically in the above table, so let us explain.

How to get the Pokemon Sword and Shield Shiny Charm

The Pokemon Sword and Shield Shiny Charm is a simple concept; once you have it in your bag, the chance of each encounter being a shiny Pokemon is increased. Question is, how do you get the Shiny Charm? You're going to want it before you even start shiny hunting, and it's not easy.

To get the Shiny Charm, your first goal is to... complete the Pokemon Sword and Shield Pokedex. Yep, you need to catch every single one of the 400 Pokemon in the game. You'll need to do some trading to make it happen thanks to the various Pokemon Sword and Shield differences, but it needs to happen before you can get your hands on the Shiny Charm.

Once your Galar Pokedex is at 400/400, head to Circhester. Enter the west door of Hotel Ionia, go up the elevator, then enter the room on the far left. You should've spoken to the Director once before now in order to get the Catching Charm, but now you've completed the Pokedex, he'll reward you with the Shiny Charm. Result.

How to shiny chain in Pokemon Sword and Shield

So while encountering 500 of the same Pokemon will increase the odds of you finding a shiny, that isn't the same as shiny chaining. If you encounter and then defeat or catch up to 25 of the same Pokemon species in a row, the odds of finding a shiny are increased even further. If you stumble into one that isn't the same species, make sure you run away and don't catch it or let it faint, because your chain will be reset.

Once you hit a chain of 25, that's the maximum you can shiny chain in Sword and Shield. Combine all three methods (Shiny Charm, 500+ battles, and a 25+ shiny chain) and your odds of encountering a shiny will increase drastically, from the base 1/4096 to 1/455.

What are square shinies in Pokemon Sword and Shield?

so apparently my Elephant is a rare square shiny or smth #PokemonSwordShield #NintendoSwitch pic.twitter.com/5uvgdb8u9yNovember 20, 2019

You may have heard whispers of the elusive square shinies in Pokemon Sword and Shield, so let us shed some light on the situation. In an effort to add even more longevity to Galar by Game Freak, you can now find two types of shiny Pokemon; standard and square. Standard shinies are the shiny Pokemon everyone knows and loves from previous games, while square shinies are brand new.

On paper, for every shiny encounter in the game, it has a 1/16 chance of being a square shiny instead of the standard. You'll be able to tell whether it's standard or square by the intro animation; the usual stars will be replaced by square outlines, but the difference in colour palette is still the same. Don't worry, square shinies aren't a different shade!

It's not quite as simple as that however. If you follow the chaining method explained above by catching or defeating 25 of the same Pokemon in a row, those 1/16 odds will be flipped. Instead, you'll have 15/16 odds of finding a square shiny, and just 1/16 of the shiny being standard.

How to breed shinies in Pokemon Sword and Shield

If you're new to shiny hunting, you'll want to read up on the Masuda method of breeding shinies. Named after Game Freak director Junichi Masuda who implemented this method into the games from Generation IV onwards, understanding the core concept behind this is crucial if you want to increase your chance of getting shinies while breeding.

In order to make the Masuda method most effective, the best option is to catch a Ditto in your language, then trade it for a Ditto caught in another language. Since Ditto can breed with almost every Pokemon and is the main way of breeding for eggs, once you've got a Ditto in a different language, you don't have to worry about anything else. Breed the Pokemon you've caught with it and voila, your chances of finding a shiny through breeding will be vastly improved.

That's all there is to it when it comes to shiny hunting in Pokemon Sword and Shield! Complete the Pokedex, trade for a Ditto that speaks another language, and you'll be sorted. It'll still take a while, mind. Good luck!