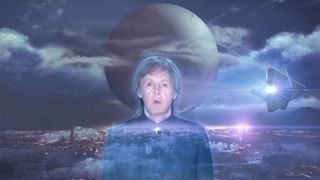 The strange history of Paul McCartney and the Destiny series actually goes all the way back to the original game. McCartney came on board for 2014's Destiny to help with its soundtrack, and the song "Hope for the Future" became unofficially known as the Destiny Theme. Heck, it was even launched alongside the game as a single.

However, it was roundly panned and became somewhat of a joke, especially because you could visit the lounge inside the Tower to play the video too.

Then, do you remember back in 2017 when Destiny 2 launched and everyone started finding various Easter eggs lurking in the game's nooks and crannies? Well, one of those Destiny 2 Easter eggs involved stopping to listen outside a locked door that would have led to the lounge in the opening mission, Homecoming, where you battle through the Tower during its destruction. If you lingered by said door, you could actually hear a warped version of "Hope for the Future" leaking through the cracks.

And now, well, Bungie has done it again.

Exploring the Tangled Shore, one of the new areas that you'll be able to explore in Destiny 2: Forsaken, there's a Lost Sector just to the left of the entrance to the Spider's lair. It might not look like much, but after a meander down a corridor you'll reach a door guarded by a Taken. Or should I say, a doorman.

Yes, beyond this door lies what's basically a Taken pub, where, you guessed it, Paul McCartney is providing the ambience with "Hope to the Future" being blasted out by the resident DJ for some merriment. If you really don't like Mazza's tune you can eventually take over the DJ booth yourself, after a firefight of course, and then head on down to explore the rest of the Lost Sector - known, hilariously, as the Seedy Underbelly.

It's a lovely nod to the fact that Bungie absolutely acknowledges its past - both good and bad - and the fact that McCartney's song, and no doubt this is just the start of the Forsaken Easter eggs that players will start finding starting right now, because Destiny 2: Forsaken is out now on PS4, Xbox One and PC.

Still not convinced by Destiny 2: Forsaken? Here are 8 things you need to know before launch, straight from Bungie.