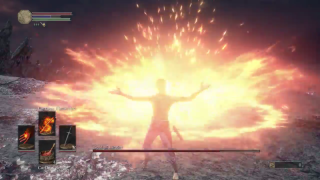 As far as difficult games go, not many series rank as highly as Dark Souls. And while Dark Souls 3 is perhaps the most accessible of the franchise, it's still no cakewalk, even for veterans. But streamer TolomeoR makes the whole affair look easy, as he takes on the final boss with a level 1 character wearing no armor, and without dodge rolling, blocking, or parrying.

The even more impressive thing is, TolomeoR isn't stopping there. He's currently working his way through the game's boss fights with the same level 1 character in New Game + mode. And not just regular NG+, either; he's on NG+7, which gives enemies an absurd amount of bonus health and damage.

Welp, that does it fellow Dark Souls 3 players. Let's go home. This is TolomeoR's game now.