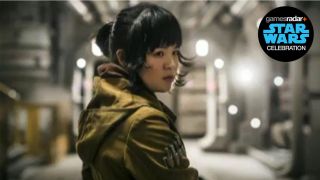 Among the many revelations from the Star Wars: The Last Jedi panel at Star Wars Celebration Orlando 2017, we also found out Kelly Marie Tran is playing. Director Rian Johnson introduced Tran to the audience at SWCO saying that she has the "biggest new part in the new movie... and she plays..." At which point, Tran walked onstage to a cacophony of fanfare and applause. Those teases!

Tran soon revealed that her character is named "Rose," (kinda plain for the Star Wars universe, but no judgment) and that she works in the Resistance as part of the maintenance crew. That may seem like a pretty low-key part, but that's the appeal, said Johnson.

"Just watching Luke Skywalker kind of get pulled out of - and I think it's why people respond to Rey also - get pulled out of wherever he is and be this unlikely hero... the notion that anyone out there, any of us, can step up and turn into a hero, that's really where the character of Rose comes from," Johnson said. "She's not a soldier, she's not looking to be a hero, and she gets pulled in a very big way into an adventure in this movie with Finn."

Keep an eye our Star Wars Celebration Orlando 2017 hub page for more news from the event as it happens.