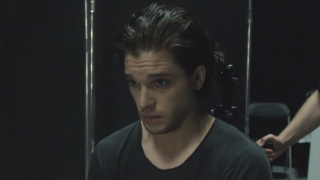 Game of Thrones actor Kit Harington (who you may know better as Jon Snow) is apparently in Activision's facial capture studio, according to Mashable. The site has obtained video footage of Harrington being wheeled into a facial capture rig, and it's a device that looks awful familiar.

The top image is from Mashable's video, while the bottom is from when former Seahawks running back Marshawn Lynch was being scanned for his appearance in Call of Duty: Black Ops 3. That ended up being little more than a background cameo, and it's unclear if Harrington will get the same treatment or if he'll be given a meatier part this time around, or if this is even for Call of Duty at all.

I mean, Harrington is a legit actor (no offense, Beast Mode), so I doubt Actisivion would waste the energy putting him in there if it wasn't going to capitalize on his talents, but who can be sure?

I guess you could say we know nothing of Jon Snow.

Seen anything newsworthy? Tell us!