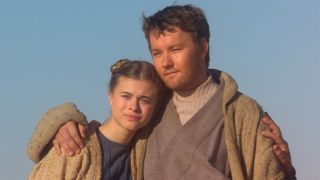 Actor and director Joel Edgerton has amassed such a body of work that it’s easy to forget he actually played a small part in the Star Wars universe. Back in 2002, he was cast as the young Owen Lars, eventual foster parent of Luke Skywalker, in Star Wars: Episode 2 – Attack of the Clones.

Ahead of the release of Edgerton’s upcoming movie as a director - ‘gay conversion’ therapy drama Boy Erased – Edgerton spoke to our sister publication Total Film magazine for an in-depth career interview. Of being cast in Attack of the Clones, the Australian star says: “It totally was [like hitting jackpot], as miniscule as my part was in Star Wars. I couldn’t believe that they were shooting in Australia, that I was an actor of the right age to play a young Uncle Owen. It was my 26th birthday when I found out I got the job. I was so fucking over the moon. And then it gave me the opportunity to go to the States.”

For a young actor, there are more benefits to being in Star Wars than just getting to visit Tatooine. “Star Wars allowed me, in that 18-month period while they were putting the movie together, to bluff my way into any meeting I wanted. ‘I’m in Star Wars. I’m not telling you that I’m only in it for five minutes and that I don’t have a lightsaber.’ I would have meetings with people, and let them believe I was a larger part of the story than I actually was. That was a good time and allowed me to get my first job out of the States.”

In his directing career so far, Edgerton has gone from high-concept thriller The Gift to prestige drama Boy Erased, and he hopes his directing choices will be able to be as varied as his acting roles. “I’m happy if people can accept me as a director going, ‘Maybe I’ll make a comedy!’” he says. Just don’t expect him to move into franchise filmmaking any time soon. “I just need each new film to have some substance,” he says. “I don’t think I’ll ever be a director for hire to make the ninth sequel of something – not while I have my own fresh ideas.”

Boy Erased is out now in the US and will open in the UK on February 8, 2019. For much more from Edgerton, pick up the new issue of Total Film magazine when it hits shelves this Friday, November 16, 2018.

As well as an in-depth cover feature on M. Night Shyamalan's Glass, you’ll also find the latest on Creed 2, Spider-Man: Into the Spider-Verse, Bumblebee, Beautiful Boy, How to Train Your Dragon: The Hidden World, and interviews with Joel Edgerton, John C. Reilly, Steve Coogan, John Carpenter, and much more. This issue also comes with a supplement on the 50 Greatest Superhero Movies (not available with digital and compact editions).

And if you’re a fan of the mag, why not subscribe so that you never miss an issue? If you sign up, My Favourite Magazines will deliver every new issue through your letterbox before it hits shelves, and you’ll get an exclusive subscribers cover AND save money on the cover price.