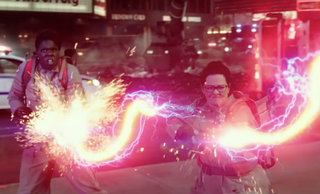 One of the more memorable aspects of the original Ghostbusters is Ray Parker's classic, catchy theme, which turned "Who you gonna call?" and "I ain't afraid of no ghosts" into catchphrases. Doing it justice in Paul Feig's highly anticipated reboot was always going to be a tall order, but Fall Out Boy and Missy Elliot answered the call.

Check out their guitar-laden cover below...

I have adopted a wait-and-see approach when it comes to Paul Feig's Ghostbusters reboot - I've actually liked a lot of what I've seen so far - but this updated theme is doing nothing for me (and I say this as a fan of both Fall Out Boy and Missy Elliot). I'm holding out a small semblance of hope that it works in the context of the movie, but my confidence is not high. With that said, a good movie could go a long way to forgiving a bad theme song.