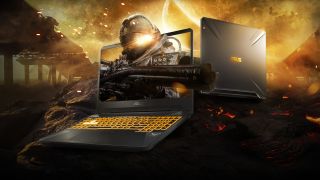 If you've been eyeing up the Black Friday sales period in order to get a cheap gaming laptop deal then you are bang in luck today. The good folk at ASUS have two TUF gaming laptops up for grabs over at Amazon UK, both down to their lowest ever price, and both offering great ways into portable PC gaming.

Both models are from the FX505 range and are really considered and well-thought out, balanced builds. First up is the FX505DV-AL014T variant. This has an AMD R7-3750H processor, an RTX 2060 graphics card, 16GB of RAM, a 512GB SSD, all behind a 120Hz, 15.5-inch panel, all for a great price of just £889. This saves you an enormous £361 and brings the laptop down to a price that is very close to entry level laptop prices. The RTX 2060 graphics card is the main attraction here as, on its own that card can still command prices of between £300-350. This means that card represents more than a third of the laptop's entire cost. It offers a really great way to be ray-tracing ready too. The fact it's got 16GB of RAM is a great bonus and the Ryzen processors have proved themselves as worthy for gaming laptops. t's a really attractive build for that price. Probably need to ensure you have some extra storage somewhere, mind.

The other model is a more-stripped back version of the laptop, but it is still a nicely balanced build and a great 'first gaming laptop' model, or a budget one you may want as a messing around on laptop. The ASUS TUF FX505DT-AL086T model - another catchy name, we know - sports an AMD R5-3550H processor, a GTX 1650 graphics card, 8GB of RAM and a 256GB SSD and is going for the very tempting price of £598.50 right now - it's lowest ever price and a saving of about 200 quid. Not a powerhouse of course, but it'll still play lightweight online games like Fortnite and Overwatch superbly and give everything else a good go on lower settings.

These are some of the best early Black Friday gaming PC deals we've seen thus far and are some really tempting offers if you want to avoid the madness that may well come later this week.

Don't forget to keep abreast of all the upcoming price cuts by visiting our regularly-updated Black Friday game deals hub here at GamesRadar+.