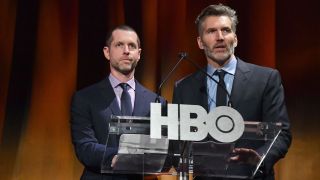 In a last-minute plot twist worthy of the HBO fantasy series itself, Game of Thrones showrunners DB Weiss and David Benioff will not be attending the show’s SDCC panel. In what would have been their first public appearance since the backlash to Game of Thrones season 8 – and a highlight of the San Diego Comic Con 2019 schedule – the pair are unable to attend due to apparent “scheduling conflicts”. It has also been revealed that two other actors and a long-standing series director have also dropped out.

Variety has confirmed that the panel, which takes place this Friday at 5:30 pm PT, will not include appearances from Weiss and Benioff, nor actors Iain Glen or Nathalie Emmanuel (who play the dearly-departed Jorah and Missandei respectively). Miguel Sapochnik, director of Battle of the Bastards, as well as that darker-than-dark Battle of Winterfell episode, will also be MIA.

According to the report, the reasons given for the five absences are “production and scheduling conflicts.” For what it’s worth, Weiss and Benioff have an upcoming Star Wars trilogy to prepare for – though the timing may irritate some looking forward to what could have been an explosive panel. You can put those shame bells away now, folks.

If you’re still heading to Hall H, though, there’s still plenty of cast members to get excited about. HBO has confirmed that Maisie Williams, Nikolaj Coster-Waldau, Isaac Hempstead-Wright, Liam Cunningham, John Bradley, Conleth Hill, and Jacob Anderson. Sophie Turner, Lena Headey and Emilia Clarke have not been listed among the panellists.

Let's hope some of the cast are open to answering the biggest questions we had after the Game of Thrones ending.