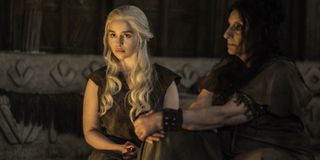 While this week's episode of Game of Thrones started with a cathartic bang, it ended on an equally epic moment. Emilia Clarke's Daenerys proves to her Dothraki captors that there's a reason one of her many titles is 'The Unburnt' by burning the Khals alive in their temple.

"Not since season one have we had an opportunity to do something like this", Clarke explains in a new featurette. "Each time she pushes over a new pyre, she gets more confidence. And I think that proof of knowing that she doesn’t need dragons to be the leader and warrior that she is, is exactly what makes her the kind of character who could sit on the Iron Throne".

Daenerys' big moment was an excellent way to conclude the episode; not only does it immediately make her storyline far more interesting, it also could give the character the impetus she needs to FINALLY start heading to Westeros. Here's hoping she starts making her way sooner rather than later.

Season 6 of Game of Thrones airs Sundays on HBO in the US, and Sky Atlantic on Mondays in the UK.