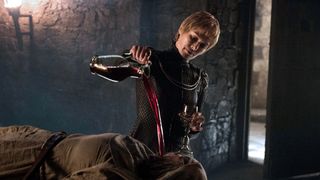 While Septa Unella's infamous "Shame!" chant in Cersei's walk of atonement has gone on to become one of Game of Thrones' best memes, every fan knew that Cersei's revenge was just a matter of when, not if. That moment finally came in 'The Winds of Winter', which saw the newly crowned Queen of the Seven Kingdoms leave the nun with The Mountain. It's a cruel scene, but Unella was originally meant to suffer a worse fate:

"The scene was meant to be worse, but they couldn’t do it", Headey told Entertainment Weekly. "This is like the tame version. It’s pretty bad still though. I’d take being exploded in the Sept over that any day".

"It’s so filthy. It’s so great", Headey continued. "Everybody’s witnessed what happened with the two of them. I don’t think people will be able to help going, “Yes!” But it’s so depraved, it’s brilliant".

In what is a testament to what Game of Thrones does so well, I wasn't exactly rooting against Cersei as we all know Unella had it coming. Though we'll probably never know what the original plan was, suggested violence can often be just as, if not more effective than actually showing what transpires, and that was definitely the case here.