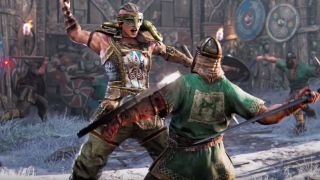 Duel Mode is extremely popular amongst the For Honor community, and it’s not difficult to understand why. These one-on-one cage matches are intense, dramatic and highly competitive affairs, pitting ranked players against each other for a no-nonsense test of their mastery in combat. Whether they last for a series of agonising minutes or are over in a matter of seconds, Duel Mode is about letting the best player win purely on the basis of their skills, but there’s more to it than the simple clashing of rival swords. If you’re desperate to finally put a friend in their place, or merely wish to do battle with strangers on the internet, here are a selection of tips and tricks that can make all the difference to securing victory in For Honor’s Duel Mode.

At the start of every new match in Duel Mode, you’ll be able to select your class, but For Honor won’t allow you to switch classes in between rounds. This means that you’re stuck with the same class for an entire match, so it’s imperative to make an informed choice that’s right for you. For a start, it’s best to select a character you’re familiar with rather than using the duel as an opportunity to test out a completely new class, but there’s more to it than that. Other considerations to take into account might be the map you’re playing on, the attack style you think would suit the occasion, or the character you’re interested in levelling up. Alternatively, if you’re playing against a friend and happen to know their favourite hero of choice, preemptively give yourself a leg up by opting for the perfect counter-remedy.

That said, while picking the appropriate class to accommodate your play style is certainly important, don’t immediately lose hope when you find out that your opponent has selected the perfect counter to your particular hero. Even if they technically outrank you in offensive or defensive capabilities, For Honor rewards skill above all else, so you still have a chance to take them down. Get a feel for their play style and figure out how best to approach from there. You might wear them down by focusing on evasion strategies, or simply try and throw them off a nearby cliff whenever you get the chance. Above all, don’t panic, but instead try to make the best of a bad situation, even when the odds seem mightily stacked against you.

All of the most adept soldiers in For Honor must demonstrate a keen sense of positioning and orientation, the effective application of which can mark the difference between life or death at any moment. This is because practicing a keen sense of spatial awareness is of vital importance for gaining offensive advantages, while also ensuring you never compromise your own defensive position. For example, though it’s certainly healthy to made good use of dodging and enemy-baiting techniques, it is just as essential to make sure you’re not letting yourself get backed into a corner at the same time. That last bit rings especially true if you’re playing as a heavy class, who aren’t able to evade or navigate terrain as easily as most.

Patience, meanwhile, is a virtue

For Honor accommodates all styles of play, including hyper-aggressive tactics, but it’s best to assess every situation in Duel Mode before you start charging into a player without any forethought. Button-mashing won’t work here; instead, try to gain the upper hand on your foe through parries, combos, and other advanced strategies, rather than rushing the enemy and leaving yourself vulnerable to critical attacks. In other words, think before you act. As enticing as it might be to jump straight into the fight, exercising caution and even letting the enemy make the first move represent equally valuable tactics for any seasoned player.

It might be somewhat feasible to get by on nothing more than zone attacks and reckless sword swinging in the rest of For Honor’s multiplayer modes, but Duel Mode forces you to get to grips with the game’s core stance system. If you aren’t capable of blocking incoming attacks or delivering well-timed strikes against your adversary, it’s unlikely you’ll be lasting more than a few seconds at best. Learning to respond to the enemy’s behaviour in an effective and reactionary manner is as much a test of your reflexes as it is your ability to perceive information, but these skills can always be improved through study and practice. You might even want to take the time to memorise and learn your hero’s combo attacks, awarding you the chance to one-up your rival before they can even put a chink in your armour.

Amid all the clanging of sword and steel, it’s easy to forget that sometimes the best form of attack can be as simple as a good old-fashioned shove. If you’re finding it hard to get your weapon past an enemy’s well-maintained defence stance, remember to employ your guard break ability to open them up to attack. Breaking a player’s guard also leaves them vulnerable to throws and tackles, which can be particularly useful for throwing them into an environmental hazard to finish the job. Speaking of which...

The environment is your friend

For all the swords, axes and polearms on show, one of the most perilous threats you’ll encounter in For Honor is the environment itself. Luckily, you can use these dangers to your advantage too. Every single map in Duel Mode features some form of environmental hazard, be it a spiked pit or a sheer cliff face. If you can manage to force your enemy close enough to these health and safety nightmares, you have a pretty good chance of being able to dispatch them with nothing more than an effortless push. Better yet, watch them accidentally stumble into the hazards before they realise it’s too late. Just don’t let the same fate befall you, as it’s really quite embarrassing.

Got any more Duel Mode tips for your fellow fighters? Let us know about them in the comments below.