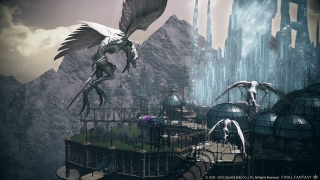 Final Fantasy 14 was conspicuously missing from the batch of Final Fantasy games coming to Game Pass, but Phil Spencer promises we'll see the cross-platform MMO on Xbox One eventually. Speaking to press in a pre-briefing at X019, Microsoft's executive vice president of gaming Phil Spencer said Microsoft is in the process of finding a "solution" to bringing Final Fantasy 14 to Xbox One.

"Rest assured, that we will be bringing [Final Fantasy 14] to Xbox; we have a great relationship with Yoshida-san, and we are working through what it means to bring a cross-platform MMO that they have run for years… but it will be one of the games that is coming and it's something that I know our Xbox fans will be incredibly excited to see," Spencer said.

Final Fantasy is a subscription-based MMORPG currently available on PC, PS4, and PS3. It's likely that its nature as a cross-platform experience is what's holding up the Xbox One port. Spencer made sure to include the term "cross-platform" when talking about bringing Final Fantasy 14 to Xbox One, and game director Naoki Yoshida told Wccftech in June that Microsoft's restrictions were holding up crossplay support.

Look out for deals on Final Fantasy 14 and a whole lot more with our guide to the best Black Friday game deals.