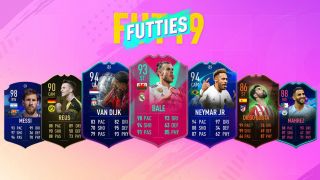 We’ve almost reached the point of the calendar where FIFA 19 addiction morphs into FIFA 20 addiction, but EA isn’t letting last year’s game simply fade away into retirement. Instead, it’s just announced that the series’ annual ‘Futties’ campaign is back for another year.

Futties is FIFA’s somewhat unconventional end-of-season awards, where those who’ve become cult heroes in videogame terms get their due rewards - irrespective of performances in real life. Fans vote on their favourite players in various categories, and the winner of each vote receives a massively boosted Ultimate Team card.

FIFA 19 Futties runs from 3 July until 14 August, and the first player picks cover ‘Speedsters’. Login now and you’ll be able to choose your favourite from Keita Balde (Inter Milan), Hirving Lozano (PSV) or Gelson Martins (Monaco). In return you get a one-match loan card for that player, with the winner’s upgraded Futties card added to the mode in the coming days.

The event also sees you earn a reward pack next time you log in, as a token of thanks for your time spent playing FIFA 19. As someone who’s played daily from the outset I earned an Ultimate Pack, the best possible reward. 30 items, all gold, all rare. Here’s a screenshot of what it included:

Yep, a unique card in the shape of Man Of The Match Mervan Celik, but no-one who’ll get close to my endgame squad. Hmmm. Still, it’s free SBC fodder. Better that than nothing, I suppose.

The event also sees popular items from the past year re-added to packs, enabling users to deploy cards they missed out on first time around at massively reduced prices. There are 198 available in total, and helpfully EA has released a spreadsheet listing them all. Might finally be time I coughed up the coins for Marouane Fellaini’s Ultimate Scream card, which has had rave reviews from the community all year. Hardly surprisingly given that he’s 6’4”, with scores of 99 for pace and dribbling.

FIFA 19 is out now. Already making eyes at next year’s game instead? Then take a peek at 11 FIFA 20 features that need to be added according to fans.