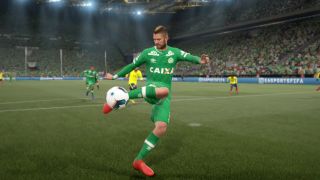 In a move widely – and rightly – praised by its community, EA has given all FIFA 17 Ultimate Team players free Chapecoense kits and badges to be worn in tribute to the club stricken by Monday's air disaster.

The majority of the Brazilian side's squad and staff, plus journalists and crew, were killed in a crash that claimed 71 lives. In response, gamers on the FIFA Reddit requested that its strips were made available within Ultimate Team free of charge as a mark of respect – and EA, to its credit, has done exactly that.

On loading up Ultimate Team, players are given the option to save (or immediately use) the club's badge and home and away strips, with the message, 'Wear this kit and crest in support of the friends, family and fans of Chapecoense.'

It's a doubly commendable move as yesterday some sought to use the disaster as a means to quickly make in-game coins, instantly buying any of the club's items released into the market, then relisting them at their maximum buy now price of 5,000 coins.

EA uniting its entire FIFA community behind a cause rarely, if ever, happens. On this occasion it's done exactly that.