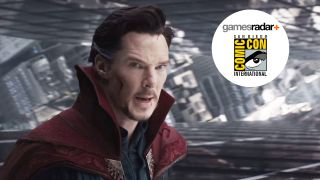 Despite assurances that none of the footage screened at its Hall H panel would make its way online, Marvel promptly thought 'to hell with it' and released the second Doctor Strange trailer almost as soon as it debuted at San Diego Comic Con. Take a peek, below:

Like the first teaser, we get a decent idea of Stephen Strange's journey from a man without direction to a powerful sorcerer on a mission. Benedict Cumberbatch and Tilda Swinton are on top form, plus we get an extended look at Mads Mikkelsen's baddie Kaecilius.

The added bonus here is that the stakes are raised considerably for him, as we're shown further scenes of bended reality that appear to be causing waaay more devastation than The Avengers could ever bring. Speaking of those Earth-bound heroes, it'll be interesting to discover what effect Dr. Strange's adventure will have on the rest of the MCU. It could easily be a neat way to tie together the supernatural/weirder elements (like this and the Guardians) to the slightly more grounded events of The Avengers' world.

And here's the Comic Con poster: