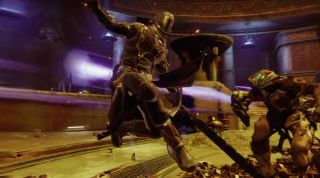 The Calus Mini Tool is a better version of the Mida Mini Tool, a Legendary SMG which is meant to be paired with the Mida Multi Tool Exotic scout rifle. This gun was designed with Destiny 2's initial double-primary weapon system in mind, so it's not that powerful nowadays, but with the right roll the Calus Mini Tool can still do decent damage. It's not a good PvP pick, but it's fun in PvE, especially if you're a Mida enthusiast. Look for aggressive perks like Grave Robber and Slideways in slot one, and for slot two, Surrounded is your best bet for a big damage boost.

Beloved is the new hotness in the Crucible, but it's also a strong PvE sniper rifle. It has above-average stats compared to other 90 RPM snipers, and it can land some rare perk combinations. It's the only sniper that can roll No Distractions, which reduces flinch when you're scoped in, and it also supports Snapshot in slot one. For slot two, Fourth Time's the Charm is a great PvE perk, and both Quickdraw and Moving Target will do well in PvP. If you really want to double down on hard-scoping, a No Distractions and Box Breathing combo will keep you steady in PvE and let you shut down roaming Supers in PvP. A handling masterwork will make this gun snappier, but if you've running Quickdraw or you have lots of sniper armor perks, a range masterwork will also boost your target acquisition.

Fixed Odds is one of the new 360-RPM machine guns. It's a slow-firing, hard-hitting chunker, and like all machine guns, it's great for clearing groups of enemies at medium to long range. The go-to PvE roll is still Feeding Frenzy and Rampage with Armor-Piercing Rounds, but Surrounded is another decent perk for slot two. That's all you'll really need, because 360-RPM machine guns really don't belong in the Crucible. They lose to 450-RPM machine guns like Hammerhead in pretty much every category, but they're monsters in PvE. As always, a range Masterwork is nice. Noticing a theme here?

Austringer is based on the Eyasluna, a fan-favorite Legendary hand cannon in the original Destiny, and it's every bit as popular now. It looks, sounds, and feels great, and you've got a good selection of rolls. For PvE, Outlaw and Rampage won't let you down, but Demolitionist is also a great pick for slot two. The optimal PvP roll is Eye of the Storm and Range Finder, as this will give you disgusting accuracy and range in heated gun fights. Go for a range Masterwork to really stretch this gun's limits.

Like the Calus Mini Tool, Drang's Baroque version is meant to be used with an Exotic - in this case, Sturm the Exotic hand cannon. Sturm recently received a huge PvE damage buff and a magazine boost, so the Sturm-Drang combo is a much stronger choice in PvE. It feels about the same in PvP, which is to say, it feels lacking. You're going to be swapping between Sturm and Drang a lot, so Quickdraw and Snapshot are great perks to go for. Disruption Break is another synergistic perk for slot one, and Zen Moment is a fine perk for slot two as always. Handling is a good Masterwork choice given the play style, but anything other than reload - Sturm kills automatically reload Drang - will work fine.

Fusion rifles got a major boost in the Season of Opulence, and The Epicurean is nothing to sneeze at. It's the only fusion rifle that can roll with Swashbuckler, which is an incredibly strong PvE perk. If you get one melee kill, your next few shots will melt whatever they hit. Another of The Epicurean's strengths is how many good perks it can roll with. You've got Tap the Trigger, Feeding Frenzy, and Under Pressure in slot one, and Demolitionist, Range Finder, Backup Plan, Swashbuckler, and Moving Target in slot two. For PvE, I'd recommend Feeding Frenzy and Swashbuckler. For PvP, Tap the Trigger and Range Finder are hard to beat. Range should be your go-to masterwork in PvE and PvP; if you want more stability, try a Counterbalance mod.

If you haven't gotten the curated Threat Level shotgun from Scourge of the Past, Imperial Decree is your new best friend. It's a 55-RPG kinetic shotgun which can roll with Grave Robber and Trench Barrel, which is an extremely effective combo in PvE. Other great PvE perks include Slideways and Feeding Frenzy in slot one, with Swashbuckler and Rampage in slot two. I'd recommend Dust Rock Blues over Imperial Decree for PvP, but a roll with Slideways and Snapshot, Rampage, or Moving Target ought to serve you well. As usual, range is great as a Masterwork, especially since the Imperial Decree has low range to start. That said, extra handling can be real nice in PvE where range doesn't matter as much.