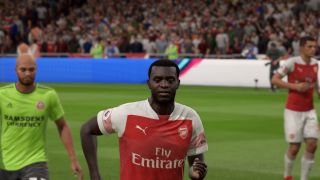 13 France Under-21 caps suggest a highly promising career, but what else can we learn from the Dayot Upamecano FIFA 19 stats ledger? The Red Bull Leipzig youngster is rumoured to be en route to the Emirates on transfer deadline day, and below we’ll weigh up his chances of filling disgraced ex-skipper Laurent Koscielny’s centre-back boots.

First thing to note is that for all his potential, only two Dayot Upamecano FIFA 19 cards arose last season. His base 76-rated FIFA 19 item was the one found in packs for much of the 2018-19 campaign, and will form the basis of this feature. But he also scored an 88-rated ‘FUT Future Stars’ card which those still playing can currently nab for a very affordable 33,000 coins.

Anyway, that 76-rated card. It’s not one which suggests that Upamecano will be an immediate success in the Arsenal first team, with plenty of defensive stats that need work. The 6’1” Frenchman earns 67 for marking, 69 for heading accuracy, and 73 for sliding tackle – although his 84 rating for standing tackle is significantly more promising.

Physical stats tell a different story, however, and suggest Arsenal are getting a player with the tools to be moulded into the next Kolo Toure. Upamecano scores 89 for strength, 84 for jumping, and 80 for aggression, while a sprint speed of 84 gives him great recovery abilities on the rare occasions that he is beaten for power. Tasty.

Main weakenesses come into full view once Upamecano crosses the halfway line. 62 passing and 59 dribbling are survivable if you keep your tactics simple, but don’t go blasting shots away should he cruise towards the opponent's goal: a finishing rating of 39 and long shots score of 24 mean you’ll be highly fortunate to strike so much as the corner flag.

The Dayot Upamecano Football Manager stats rundown is, alas, more pity party than London carnival. Pace (18), balance (17) and strength (16) please, but again a few of those defensive attributes sound alarms. 15 for tackling and 14 for marking are just about passable for a squad player. However, 12 heading and - oof - 11 positioning won’t cut it against the Harry Kanes and Romelu Lukakus of the Premier League.

There are some other promising numbers in Football Manager, though: Upamecano nabs 16 for bravery, 15 for determination, 14 for work rate, and 16 for natural fitness. Which should at least him keep away from the home dressing room’s dreaded treatment table.

FIFA 19 is out now. Already planning for next year? Then have a peek at the newly confirmed list of FIFA 20 career mode features.