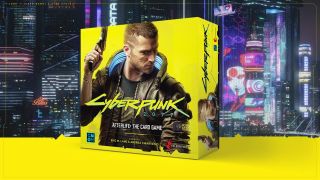 Cyberpunk 2077 is getting its own official card game that turns players into Fixers as they compete to bite off the biggest chunk of the Night City underworld. If you aren't hip to the parlance, Fixers are folks like Dexter DeShawn, the guy in the E3 2019 trailer who hires V to do a job and then tries to kill V when he makes too big of a scene. Hopefully your relationship with your cyber-contractors will go better.

"In Cyberpunk 2077 – Afterlife: The Card Game, players become Fixers. Fixers are the databrokers and masterminds in Night City who recruit cyberpunks, equip them with gear, and send them out on missions. But nothing’s free in Night City. Players need to balance between what they want and what they can actually afford. Using an innovative drafting mechanic and special dashboard, players must decide which cards they want to buy, and which to sacrifice for funds in order to purchase new ones.

Each successful mission raises the player’s Street Cred, with mission survivors becoming Veterans, imparting their knowledge and experience to newer recruits. In this chrome-infused world, Street Cred is the only currency that truly matters."

CMON teases that Afterlife will be the first collaboration between it and CD Projekt, "with plans for more to follow". As a fan of the recently ended Netrunner card game, which started out as a Cyberpunk-licensed product before the whole system was updated and transposed to a different fictional universe, that automatically gets my hopes up for more asymmetrical card-based battles between corps and runners. Cyberpunk 2077: The Board Game would be cool too.

Find more to play while you wait in our list of the best board games.