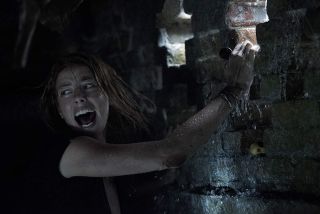 We've seen sharks terrifying small towns. We've witnessed anacondas eating humans as they sleep. Now, for the umpteenth time, watch an alligator terrify a young woman - except, this time, the movie's actually meant to be quite good.

Produced by The Evil Dead's Sam Rami, Crawl sees Kaya Scodelario playing a woman who, while attempting to escape a hurricane in Florida, gets trapped in a house. Unfortunately, that house is invested with hungry alligators. SFX, TotalFilm and GamesRadar have an exclusive clip from the film, which you can watch below. Warning: there's a big jump scare in there!

Speaking to TotalFilm, director Alexandre Aja - who previously directed the horror films Piranha 3D and Horns - said he fell in love with the movie's story after reading the logline. "So simple," he said. "Alligators would not be in the ocean, like Jaws, or in the river... they would come inside your house."

Aja continued: "Piranha was a guilty pleasure movie, puerile, funny, gory, un-PC, and Horns was a dark fable. But in all those years since High Tension and The Hills Have Eyes, I never lost sight of wanting to come back with something really scary."