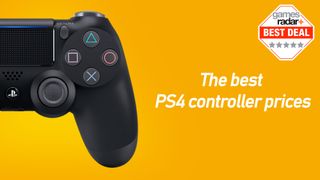 If you're after the cheapest PS4 controller prices and deals that you can get right now, then you're in luck: we've been busy rounding up the very finest options. We've got you covered for the official Sony DualShock 4 and a few of the best options from third-party manufacturers too if you fancy something a little different to the PS4 controller that came with your console. Though if you just fancy trying your arm at getting a PS4 controller cheap, no matter the brand, then this is a good place to be too.

All in however, there really isn't a better option than PlayStation's official DualShock 4, in our view, if you're on the hunt to pick up a cheap controller price while still getting a premium model. The DualShock represents the most reliable, best built, most comfortable and ergonomic and generally best way to enjoy a PS4 experience (think of how some PS4 games incorporate the controller's mini speaker sometimes.) I have slightly different hands, and there's never been a better controller with those of us with smaller hands and fingers particularly - it's one of the reasons I'll always be on the hunt for a cheap PS4 controller.

Elsewhere, on a more aesthetic note, there is now a great range of styles and colors available so there's something for everyone's tastes (surely). And they've had a design refresh since their initial conception too, adding the stylish front light strip, improved battery life and more durable material on the analog sticks.

An extra PS4 controller will never not be useful or unappealing, as they enable you to bring in more players, and ensure you've always got a spare, charged pad. Getting a great PS4 controller price is a deal that will easily pay for itself over a short space of time. Especially in time for the holidays where your family and friends might be gathering around the PS4 to play some fun party games.

In terms of third-party controller alternatives, these might appeal if you're after something a bit more complex; a pad that can give you an edge in online or competitive play. If so, we recommend only going as far as the officially licensed, Sony approved pads, and don't go for second hand or too-good-to-be-true cheap ones. Beware though, their deep options and customizable buttons and commands can mean a price hike - sometimes a considerable one.

This is the original DualShock 4 PS4 controller, and it’s incredibly versatile and works with every PS4 and PS4 Pro. The design has been tweaked since the PS4 originally launched to make the thumbsticks more robust and there's now an attractive LED bar on the front of the touchpad. Just a word of warning: DualShock 4s do NOT come with a USB charging cable, which they need. You should have one from the box of the PS4 console you bought, but, if not, spares are cheap and widely available. The Amazon Basics version does the job just fine. The standard DualShock 4 is also available in an enormous range of different colors, patterns and designs now, so you can often select that at checkout.

For some, the official PS4 controller isn’t quite good enough. Maybe you’re looking to take part in eSports, or play online in some official tournaments. If this is the case you should consider looking at the Razer Raiju, as it offers a few features that aren’t standard on other pads. It has hair-triggers and sprung face-buttons that are more responsive and snappy than the slightly spongy versions on the official pad. On top of that, the analogue sticks are more responsive too, cutting down on any slight deadzone between pushing the stick and something happening on screen. To be clear, these are incredibly marginal improvements, but they can make all the difference to professional and tournament play. It also has mappable buttons under the pad itself, so you can program certain sequences in, handy if you’re looking to guarantee certain movesets every time you attempt them. The downside is that this is super-pricey.

If you don’t want to splash over $120 / £120 on a Pro controller, then the Nacon is a nice halfway house between the official DualShock and the Razer Raiju. Just be aware that you get what you pay for, so while the pad is more set-up for eSports than the standard Sony controller - with more sensitive triggers, responsive sticks, and a better d-pad (which makes it ideal for fighting games). The pad is weightier too, much like the Razer, so you’ll need to adjust your grip to get the most out of it.

This lovely, subtle GT Sport Limited Edition controller for PS4 is a neat way to show your love for the series, without ruining the excellent design of the standard DualShock. It comes in a nice silver color, and has an understated GT Sport logo on the touchpad. The perfect way to celebrate the series' 20th anniversary.

This is a tremendous official controller with the exact same features as the standard DualShock 4, but has all kinds of fancy God of War stylings on it. There’s a rune on the right hand-grip, a game logo on the touchpad, and two-tone colors on the base of the handles. Perfect for anyone looking to create a God of War bundle as a gift - just get the game and the pad. Only problem? It isn't available in the US, and there is very limited stock in the UK.

If you don't want wires running between your PS4 console and your sofa, it may be time to invest in one of these PS4 controller charging stations. They plug neatly into a power source, and allow you to charge a couple of pads wherever you choose, regardless of whether or not your console is switched on. A handy piece of kit, and available at a decent price.

Does the PS4 controller work with PC?

Yes, the official PS4 controllers do work with PCs, and they’re pretty easy to set-up. They’re, for us, the best controller you can use for PC gaming, so it’s well worth grabbing one if you prefer gaming with a pad compared to keyboard and mouse. Our sister site, PC Gamer, has an excellent and clear set-up guide right here: How to use a PlayStation 4 pad on PC. We’ve got the best deals on PS4 controllers below.