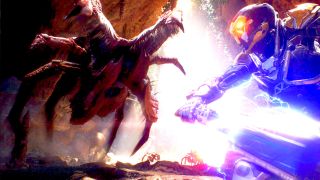 After the troubled Anthem game VIP demo - which ended with BioWare handing out skins and javelins to make up for all the downtime - a public demo is scheduled for this weekend from Friday, February 1 through Sunday, February 3. What's more, it sounds like next Anthem demo will feature a new activity not seen in the VIP demo.

In a recent blog post, BioWare's Chad Robertson advised players to "stick around for Sunday afternoon; you’ll see a glimpse of some of the cool things we’ll be doing in the future!" Some players have speculated that this surprise is our first proper look at Anthem's story, but given the lengths BioWare has gone to in order to scrub story details from the demo, I'm leaning more toward it being a taste of Anthem's endgame content, which players are equally curious about. A spider-infested stronghold was playable in the VIP demo, but that was about it, so perhaps we'll see something a little more challenging? Maybe a contract mission or traces of a raid? We'll find out soon enough.

Happily, it sounds like most of the issues that bogged down the VIP demo will be resolved ahead of the open demo. As Robertson explained, BioWare has been working on server performance, bugged Javelin unlocks, login issues, bugged mission rewards, and more. Robertson also said the infinite loading screens which plagued the VIP demo have been "improved," which I'm hoping translates to 'fixed,' or at the very least, 'less infinite.'

We'll be covering Anthem extensively for the next two weeks in our new editorial series On The Radar: Anthem.