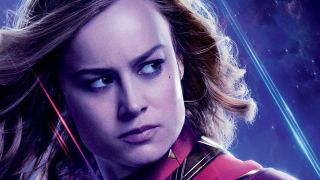 San Diego Comic-Con 2019 really packed in the announcements this year. Marvel announced The Eternals, Black Widow, Shang-Chi: And the Legend of the Ten Rings, Doctor Strange in the Multiverse of Madness, Black Panther 2, Guardians of the Galaxy 3, Thor: Love and Thunder, Captain Marvel 2, Blade, and Fantastic Four. There were trailers for the Witcher Netflix series, The Walking Dead season 10, Rick and Morty season 4 and the Avengers: Endgame writers revealed how Captain America almost died in the movie. Utterly overwhelmed by all the new hotness, we asked our team to tell us their biggest moments from SDCC 2019.

Oh lordy, give it to me now. I'll be honest with you, it was only in the last couple of years that I've been lured truly into the MCU, and it wasn't until Captain Marvel mohawked her way into my life that I was really smitten. Not only is the first movie absolutely stellar, but Captain Marvel is now integral to the MCU. She bailed everyone out in Avengers: Endgame, and now with the Skrull playing a major role in Spider-Man: Far From Home it's clear that Captain Marvel is going to be hella important going forward. That means big things for Captain Marvel 2 and I can't wait to see where her bromance with Nick Fury goes next. Sam Loveridge

If we’re going into specifics, the highlight of SDCC for me was Henry Cavill. I’m sure other fans of The Witcher series’, be it the books or the games, were relieved when he broke his silence on his new role, because it seemed like he really cared. His definition of what a Witcher is was spot on, and he really wanted everyone to know that he’s played the games. Though when he could possibly have found the time to complete the third installment, I’ll never know. I’ll admit, the trailer itself hasn’t necessarily filled me with the utmost confidence, but knowing that two thirds of gaming’s best love triangle (don’t @ me) are in good, unnaturally attractive hands, is enough for me. Ellen Causey

When AMC first announced it would be seeing out Rick Grimes' story arc via a trilogy of direct-to-TV movies, the audible groans of the internet could be heard as loudly as the cheers. Episodes of the show are long enough as it is, so a trifecta of two hour long slogathons? No thanks. Then, at SDCC, AMC unexpectedly revealed that it had partnered with Universal to bring The Walking Dead movies to theaters instead, suddenly making things a lot more interesting. This might seem like a weird pick for a favorite SDCC announcement, but that decision to bring Rick to the big screen reflects the exciting reality that AMC is going all in for this new Walking Dead story, with a high budget and cinematic format that could finally allow Scott Gimple and co to flex their storytelling muscles and deliver on the big scale moments of the comics. Yes, there's every chance that The Walking Dead movies are going to be as bad as the show's worst seasons, but - even so - at least we'll all be able to watch that train wreck on a giant theatrical screen together. Alex Avard

Shang-Chi: And the Legend of the Ten Rings

Odd subtitle styling aside, Shang-Chi was my MVP for the whole of SDCC, despite the whole world seeing no more than a logo. Why? Simple: It’s historic. Shang-Chi is going to be groundbreaking; a movie as culturally important as Black Panther, with the first Asian lead in a superhero movie, Simu Liu, already proving to be a winner. He strutted on to the stage in Hall H with such charm and warmth that he already feels like the next big hero of Phase 4 (and beyond).

It’s also a big thumb to the nose for those who have gone straight to the ‘superhero fatigue’ well ever time a new hero puts on a cape and cowl. The inclusion of the (real) Mandarin and the Ten Rings is proof that pulling on any loose thread in the MCU will make things unspool into a completely unmissable story. It’s not an exaggeration to say that, by the time Shang-Chi lands in 2021, it will have been a tale 13 years in the making. Kevin Feige’s galaxy brain has done it again. Bradley Russell

The original Watchmen comic reflected the fears of its time. Its doomsday clock ticked closer to midnight as the US and USSR goaded each other toward nuclear war. We have plenty of things to be afraid of these days, but atomic annihilation isn't nearly as high on the list as it used to be. While the Watchmen movie was competently made, it did little to modernize the anxiety at the heart of the comic's story, which made it all the more heartening to see the new Watchmen series from HBO acknowledge the changes in our world since the '80s. We fear government corruption, the police state, social divides, and getting tired of super heroes (what other movies are we supposed to watch) to name just a few modern day anxieties, and I saw all of that reflected in the trailer. Now I just have to wait and hope the actual series can deliver in October. Connor Sheridan

It’s possible that Marvel’s SDCC panel killed me. While that Blade reveal and details on Hawkeye’s Disney+ show blew my mind (if you’ve not read the Fraction/Aja Hawkeye comic it’s almost certainly based on, you should remedy that right the hell now), the reveal of Portman-Thor shattered it into hype-infused pieces. An MCU return for Jane Foster has seemed like a pipe dream for years, so seeing Portman stride onto the stage before taking up Thor’s goddamn hammer was the biggest mic-drop moment possible. For those not familiar with the graphic novel storyline behind this idea, Jane takes up Thor’s power to protect Earth after he becomes ‘unworthy’ of wielding it. The trouble is, doing so makes the cancer she’s now suffering from worse - much worse. In essence, being Thor is killing her. Talk about a plot twist, right? This is one of Marvel’s most intriguing and empowering runs to date, and that makes getting it on the big screen a delight. What’s more, seeing Taika Waititi take the helm once again is perfect. The Waititi-directed Ragnarok is arguably one of the MCU’s best flicks, so getting him back to oversee this one is beyond awesome. And honestly? Seeing more of Korg and Valkyrie is always welcome. Benjamin Abbott

Did we miss your favorite super? Want to blast us with your laser eye-beams for our choices? Let us know on Twitter.