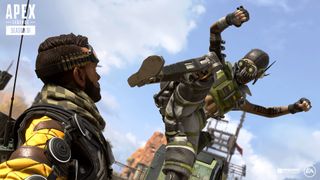 Respawn hasn't supported much in the way of Apex Legends esports since the game launched in February, but following the success of the Fortnite World Cup, it looks like they want a slice of the action: an Apex Legends pre-season invitational has been announced and will take place a few days before the start of Apex Legends Season 3.

It's no secret that while Apex Legends had a solid launch period, its popularity has since dropped and Fortnite has continued its reign as the top battle royale title on the market. Despite that, Respawn Entertainment and EA are still putting up a prize pool of $500,000 for the Apex Legends pre-season invitational, which pales in comparison to the recent Fortnite World Cup, but is still a substantial amount for an esports tournament.

The Apex Legends pre-season invitational will be taking place from September 13-15 in Krakow, Poland, where 240 players split across 80 teams of three will partake in a bracketed tournament for their share of the prize pool. it will be a double bracket tournament, so if a team doesn't meet the points threshold for two rounds in a row, they will be eliminated from the tournament.

“Competition is in the DNA of Apex Legends and this competitive event will showcase the game at its highest-level,” said Chad Grenier, Design Director. “This Apex Legends Preseason Invitational advances our vision towards a robust competitive experience with the community at the center. We continue to explore all the entertaining ways both players and spectators can experience Apex Legends and look forward to bringing this event to life.”

If you're interested in competing in the Apex Legends pre-season invitational, you can check out the official site for more information.