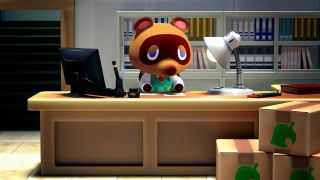 Anyone else super duper excited for Animal Crossing Switch? The Nintendo Switch seems like a perfect platform for the kind of sedate, wonderfully idle style of gameplay that the Animal Crossing series has to offer. Netflix and Crossing, anyone? You know it's going to happen, folks.

And it might be happening sooner rather than later, if this new leak from The Loot Gaming  is anything to go by. According to two separate sources speaking to the site, the Animal Crossing Switch release date is set for September 2019. You may not have heard of The Loot Gaming before, but the site did successfully predict the reveal of Nintendo Labo VR kit, which was announced last week, so it has some credibility when it comes to Nintendo flavoured leaks.

Can Labo VR hit the sweet spot between Google Cardboard and Oculus VR?

Nintendo has confirmed that Animal Crossing is launching on Switch sometime in 2019, but until now we've had no idea as to a more precise launch window. Heck, we don't even have a full name for the game yet, or any indication as to what it'll all be about - beyond the usual fish, bug, shell and bell collecting, of course.

It also states that Animal Crossing will be the big focus for Nintendo's E3 presentation. That shouldn't come as much of a surprise though, as it's one of the biggest upcoming Switch games for this year. Pokemon Sword and Shield have already had their time in the spotlight with a full reveal in February, so although it may feature in Ninty's E3 presentation, The Pokemon Company tends to keep the biggest reveals to its own, dedicated, Nintendo Directs.

I'm sure Super Mario Maker 2, Luigi's Mansion 2 and more will also appear, but it's pretty clear we're all waiting for Animal Crossing to steal 99.99% of the E3 limelight.

For now then, we'll have to wait, hopefully in the knowledge that it's really launching in September, and we're but six months away from a brand new mayoral adventure.

Want something to play right now on your Nintendo handheld? Why not check out our pick of the best Nintendo Switch games, or watch the video version below for a taste of them in action.